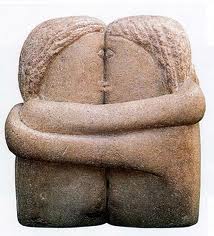 There she lay, on the living room couch, asleep. Her hand posed gently on her belly. The lights were still on, the dinner table was set and the candles were almost melted.

It was their second anniversary. She cooked his favorite food. She knew exactly when he came home from work.

Everything was ready on time. She got dressed up, wrapped his gift and sat waiting. She had a huge announcement to make.

At 11:00 p.m. he came through the door. He found his wife sleeping on the sofa. He leaned his head down, kissed her warm cheek and carried her to the bedroom.

He had totally forgotten that today was a special occasion. He was working extra hours to save up; to save up for the honeymoon they never went on. He couldn’t afford it back then.

Two years ago, he married the woman of his dreams.

They had fallen in love in college. They have shared good and bad times but their love was strong. And, most importantly, they couldn’t picture themselves apart.

Everybody was against their marriage. His family and her family too thought it was a bad idea. Dima belonged to a different sect. A different sect than Rami.

At the age of 19, when they first met, it was hardly an issue for them. Their parents had slight differences in their religious beliefs. So what? They still do good deeds. They still believe in the same God. Then why were they opposing this relationship? Rami and Dima couldn’t comprehend the reason behind their disapproval.

Six years later, as the teenage cloud faded, they grew older and wiser. Now, they know exactly how distinctive their sects are. Yet, how deeply in love they are.

Rami discharged all his weight on a chair and started eating the cold food robotically.          He was lost in his own thoughts.

He often frowned, but smiled every now and then.

Pictures of Dima twirled in his head. He recalled the very first time he saw her and how he was dazzled by her beauty and grace. Little by little, he got to know her, and grew fonder of her shining personality, perspective of life and pure soul. He thought the world of her. He adored her.

Up until today, whenever he held her hand, the rate at which his heart beats reaches its peak. Like this one time, he was on an airplane, he felt the exact same way at the take off.

He still gets that sensation when they walk hand in hand.

Her eyes had been his weak point since forever. He keeps losing himself to the sea of blue in her irises. Also her kiss, her kiss tasted better than the sweetest treat.

He began planning how to make it up to his beloved wife.

He felt guilty for the vain effort she put into this night. How could he forget his wedding anniversary? It was by far the best night of his existence.

But he was carrying a humongous burden on his shoulders. Bills, rent and a rise in the level of prices were too much to handle all at once…

These matters were like lava boiling up in the depths of his volcano, however, forgetting that special day caused the eruption. He was extremely mad at himself.

Gradually, his wrath dissolved in the water of his thinking.

Dima was indulged as a little child. She grew up in a rich family. Her parents got her everything she’s ever wanted.

Nonetheless, she knew the consequences of marrying a man with a modest income. Less shopping, an older car, fewer jewelry were all among her list. But, she did not care at all.

She has always known that money can’t buy love. And that she couldn’t put a price tag on her marriage or life.

Rami appreciated the sacrifices she made in order to be with him. And it was time to compensate her. So he decided to get up early morning, and do something to correct his mistake.

While his brain was forming mental images, his eyes were fixated on the newspaper. He read that in a nearby village, problems arose because of sectarian conflicts. Armed clashes took place and they were triggered by many factors.

Rami rolled the paper into a ball and kept it in his fist. This news was the last thing he wanted to hear.

The city in which the couple lived has been rife with political issues for a long time. Cautious calm reigned nowadays but tensions can be ignited at any time; especially when the surroundings are on fire.

As he was prying the negative vibe away from him, he noticed a small box on the armchair across the room. He ran to get it. He put it in his big hands and started unwrapping it. It was the gift that Dima planned on giving him.

Before he knew it, the red-hearted paper was on the floor. He lifted the lid off the cardboard box and found the tiniest pair of shoes he has ever seen.

Small yellow shoes! Dima must be expecting! He was overjoyed.

The married pair has been trying for some time now.

They wanted a bundle of joy, fruits of their passion and a new meaning to their lives. Every month was a disappointment to them but Dima finally conceived.

All of a sudden, the room seemed not big enough to contain Rami’s joy. It was the greatest event ever!

His happiness was too surreal. He wanted to jump and scream. He wished he could tell the entire world.

He will have a little baby to hold, to kiss and to watch grow up. He pictured himself spending time with his child. No doubt that his girl would be spoiled, but the boy should turn out to be tough.

Then, he bet that Dima was too eager to tell him. He must have deceived his wife. Guilt ran down his spine.

He spent the whole night lying on the bed, staring at the ceiling and swimming in an ocean of mixed emotions.

As soon as the dawn broke over the city and the sky turned orange, he got up. After a short while, he donned his jacket and left.

Only a couple of stores were open at this early hour. So he headed to the neighborhood florist and bought his wife the freshest pink orchids in the shop. They were her favorite. He picked up the bouquet and rushed to start his car.

Then Rami was off to his next stop: the best restaurant in town. She had always thought that breakfast in bed was so romantic. So he ordered an assortment of the breakfast foods she liked most.

Just as he drove, a reporter on the radio was announcing that the situation was aggravated. Local issues had escalated and choas started in many streets of the city. As soon as Rami heard the report, he pressed a button to turn off the car stereo. Nothing was going to ruin his good mood.

Finally, his last goal was the travel agency. He figured that there is no reason to postpone their vacation any longer and that it was the only way to straighten things up with Dima.

He discussed with the employee possible places to visit. He went through lots of brochures and finally chose a destination.

His spouse has always wanted to go to a tropical island and tomorrow her dream will come true.

On the way to his vehicle, a huge smile decorated his face.

He was pleased with himself. Dima would be thrilled for sure.

In the meantime, Dima awakened. Her fingers stretched out, seeking her husband, however finding nothing but an empty pillow. There was only a small note that read:

I’m sorry baby about yesterday! I won’t be long. Wait up!

She straightened up and faced her pallid reflection in the mirror. She didn’t feel so well. She reached for her phone and dialled unthinkingly her husband’s number. However, the music of his usual ringtone resonated. Rami had left his mobile in the house again!

Dima was hyperventilating. Her heart was pounding unrythmically.

She cringed as if her body was warning her about a bad thing. She couldn’t make sense of what was happening and why.

And there he was, a few metres away from his car. The bouquet and the food were there; the tickets stuck out of his back pocket as well. But Rami remained motionless on the sidewalk. His arms resembled empty water hoses. A veil of blood covered the pavement. Rami was hit by a stray bullet.

An innocent young man was shot by gunmen from his own sect.

People gathered around him but Rami couldn’t feel them there. He was already in a profound place that knew no worry, no pain, no weariness and no war!

They covered him with white sheets. Dima bent down and put the pink orchids on his stationary body.

Reality to her was pitch black. It was excruciating.

It felt like she was being sawed, burnt alive and bitten by a shark, all at the same moment.

His parents should have protected him from gun machines instead of blameless citizens with dissimilar doctrines.

Civil wars couldn’t get any more atrocious. They had taken away her true love, her friend, her husband and the father of her child.