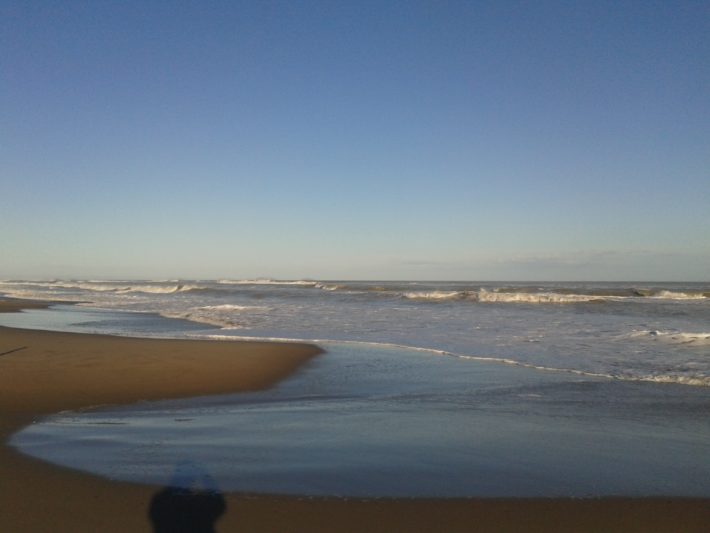 Whenever she felt like she was drowning, she sought comfort by the water. She needed the salty scent of freedom that the breeze carried over the bay. A whiff of seaweed always calmed her nerves and the familiar, pungent odor of drying clams and conchs could make her feel a little more at ease. The low tide was arduously clawing its way to the shore that day; pulling back every few seconds, getting a little further every time it returned. But despite their fervor, its timid ripples were carefully striking major chords on the shore, playing a lullaby for her troubled mind. She moved where the sand was still dry, her hair almost indiscernible when the breeze aligned it with the ground.

A part of her wanted to be entirely invisible, to vanish, so she never had to return to the wreck of pain and disappointment she’d left behind. Her mind and heart were parting ways in front of her eyes, each sprinting in a different direction. Like the waves that were cut in half by the bright red sailing boat fighting its foaming way through the water. There were two paths in front of her but so far, she’d chosen the third. She’d said ‘maybe’ to a yes-or-no question. A part of her wanted to give in, to say yes, however firmly the other half stood against it. The red-and-white striped lighthouse stood firmly, too, still far in the distance; but even the strong black metal railing around its spire couldn’t help but waiver in the throws of the unrelenting winds. Winds had time to fortify on their journey over the sea. Where was she supposed to get her strength?

Shells, stones and plastic lined her way to the beacon. But her favorite companions were the tiny, opaque pieces of glass that the sea had swallowed and spit out transformed. They’d lost all their edges in the water, become indistinguishable. She wondered if all people were doomed to end up like that. They found their character in their youth, they fought, adapted, struggled and then gave it all up to be what everyone was: a parent. A spouse. Someone’s wife. The thought of losing herself, of merging into a gray mass of faceless hypernyms made her want to scream. She wished she could be as loud as the seagull circling the bay; its pitiful, hungry wails were piercing even the harshest gusts of wind. Would that help? Could clamor make her less torn between his happiness and hers?

As she approached the promontory, there was an uproar among the waves. The behemoth of high tide was approaching his younger brother, sea spray foaming as he swallowed the blue and suppressed the green. The Greeks had believed that the white heads of the waves were Poseidon’s army of horses. She wished the stampede was really on its way; with hammering hooves and battle cries, to drown out his breaking voice that still played in her head. She wished she could let the water take her, only if for a moment, to pull a shadowy, shimmering veil over the memory of his disappointed face. The water could never have drowned her anyway, not as long as he had his hold on her. He had always been her rock, keeping her afloat in the tide of life; tethering her to the ground when she was in danger of losing touch with reality. But rocks were so horribly rigid, so unmoving, unchanging. The wind howled against the promontory and filled every crack in the solid brick, trying to find some, any way to move it. But even the sea breeze had to recede in surrender. Was it bewailing her fate as it did?

There was no point in crying. Her tears would only have blurred the truth; so she forced herself to see clearly. She’d never really had a choice. From where she stood, the sea seemed endless, immortal, invincible. It was strong enough to swallow up the fierce, fiery sun every single day. Yes, he was her ocean. Every night, when she went to bed beside him, she felt safe, but trapped. Content, but never happy. Loving, but not in love. The mere thought of marrying him felt like liquid claws trying to extinguish her light.

She’d reached the lighthouse. Its beams seemed to project the answer onto the glittering waves below. As much as she loved the sea, she knew she would have to choose the sun. When she screamed it into the winds, the water pounded its applause onto the rocks below.