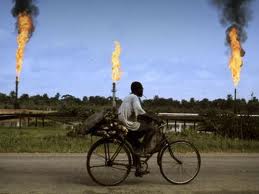 Kileleshwa. My two children, Kui and Maina, were in the back

seat playing loudly despite my protestations.

As I approached our house, I saw the boy again, hand stretched out for

whatever anybody could put in it. He must have been around six or so,

much the same age as my children. He was such a common feature that

his presence there. As usual I drove past without looking his way. Some

days I did look at him albeit briefly, just long enough to thank God that

neither of my children was in his shoes. The boy was a sight – bare feet,

tattered clothes, runny nose, and protruding belly. Many times I had

brought him our kitchen leftovers, which he received with a weak smile.

Very early in the morning and late at night, one could not miss him

walking up and down our road, hand outstretched. Didn’t he ever get

tired or have a home to go to, I wondered?

driveway. Leaving the boot open for our house-help, Wangechi, to get

out the monthly shopping, we walked into the house. It had been a

tow and well behaved in a busy supermarket while picking items

from the shelf was no easy task. I had had to give in to their cries for

ice-cream and chocolate just to keep them quiet. Disapproving stares

from other shoppers did not help.

I sank into my favourite seat, newspaper in hand, trying to block out

Kui’s and Maina’s squeals. Wangechi busied herself getting our

evening tea ready. It would not be long before my husband, Mwangi,

got home. He worked as a manager in one of the big banks in the

country, and often had to work on Saturdays.

Ours was a comfortable life. We lacked nothing. Mwangi’s job took

care of us well. The bank paid for our most basic needs, footing even

the shopping bills. It had therefore been easy to quit my job as a book

editor to raise our children.

A normal day found me reading, and corresponding for newspapers

and magazines. I picked the children in the evenings although the

school bus was available. This offered a welcome break from the

house the days I did not visit my friends who like me, preferred to

stay home and raise their children.

Mwangi soon walked in looking exhausted. I waited for him to freshen

up and round up Kui and Maina before we sat down to tea.

The next day, I left the house in the late afternoon to take my Sunday

walk. We had been to church and come straight home. Most Sundays

we had family outings but today Mwangi especially needed to rest. My

her husband. Being Wangechi’s day off, my hands had been full

through out. I therefore needed some quiet as I embarked on my stroll.

There was the boy again. I should have brought some of the left over

chicken from lunch for him. Anyway, someone may want to snack

while I was gone so it did not matter.

Side-stepping him to avoid his hand dirtying my white blouse, I

Surely, he could not expect me to feed him everyday. Only three days

ago I had brought him a full meal. His eyes had brightened up. He

had grabbed my hand and thanked me profusely. I washed it

immediately I got to the house.

roadside caught my eye. I made a mental note to cut some on my way

back to plant in my ever-expanding garden. Neighbour hooted a

greeting as he drove by.

It was almost two hours before I neared our house again. As I

approached the boy from the behind, I hoped he would not turn round

and see me – his filthy hand made me sick. I kept my eyes on him,

calculating how to make good my escape. For the first time I noticed

how thin he was. The protruding belly I often saw as I drove by did not

show for much – he most likely had kwashiorkor. Apasser-by gave him

a half-eaten banana- the half that was too marshy for her. He did not

on his side. I drew closer and prepared to hurry past. That’s when I saw

the large septic gaping wound on his arm. Its sight knotted my stomach,

making me wince as though I was the one in pain. How disgusting, I

thought. He probably was in a fight with some of the bigger boys who

also frequented our road. However, it did not look like a bruise from a

fight. Adog bite, perhaps? I did not want to imagine the pain he was in,

and yet he still kept at his beginning with a straight innocent face, too

used to all kinds of pain to feel this one. The wound was not the kind to

be kept untended. It would soon fester. Safely past the boy, I walked on

my mind focused on what to prepare for supper.

Back home I was greeted by the yelling I had run away from.

bought the day before. I only hoped they had left some for me – nutty

fruity was my best flavour. The cake cramps all over my kitchen tops

was an indication that afternoon tea was over.

My sister and her husband ate with us before leaving with their boys.

The next day was school and I shepherded mine off to bed early.

I saw the street boy again over the next few days as I drove by. Even

from a distance I could tell his hand was swelling more by the day.

Tomorrow, I told myself one day as I led the children into the house

from school, tomorrow I must check on him. I was too busy right then

thing in the morning. However, the next day I got home late in the

When I eventually got to see him it was many days later. His name

was Gidi and had no idea where his parents were: His mum once

walked out of their one-roomed shack and left him, never to return.

His father, he had never known. Gidi had therefore been forced to

fend for himself the best he knew how. Two weeks earlier, he had

neighbours. The laceration had bled for days. The wound looked

immediate medical attention. It would not cost me much to have a

doctor have a look at and dress it.

car like that. The way he smelled would make the drive to the

hospital uncomfortable. With guarded caution I let him into our

home. Wangechi washed him slowly, taking care not to hurt the

hand. Gidi looked handsome in some of Maina’s old clothes and

sneakers. Why I was doing this I wasn’t sure. I did not even

understand the sudden compassion I felt for the boy these many

months after he had become part of the landscape by our road. I sat

across the table and watched in silence as he devoured his lunch. He

had not eaten properly for a number of days. I had my fears about the

arm looked much darker than the other parts of his body. He had no

Gidi was hospitalised as soon as the doctor laid eyes on him. By

evening of the same day the arm had been amputated. As I had

suspected, the infection had spread too far for it to be saved.

However, it wasn’t until the next day that I was allowed to see him.

He lay on his bed staring at the bandaged stump by his side. It was

obvious he had been crying.

“They’ve cut my hand,” he said amid sobs. Gidi looked so frightened.

own tears. This could have been one of my children but for the

grace of God. How could I have taken it were it Kui or Maina lying

there? Guilt filled my mind as I put an arm round Gidi. Sobs

wrecked his small body. I couldn’t let him see my tears. I surprised

few days back. Now I was in hospital crying for him and trying to

find words to explain how he had become disabled overnight. Why

hadn’t I done the responsible thing two weeks before?

I visited Gidi everyday for the whole week he was there. He was

constantly on painkillers and would continue to be until the stump

healed. As the end of his hospitalisation drew near, there arose the

issue of where he would go. Mwangi was adamant when I broached

the suggestion that we house him until he got better.

“That boy can’t possibly live here,” he protested, “That’s not good for

our kids.” That was true. Gidi did harbour a lot of bitterness against

his mother for leaving him, and the world that turned a blind eye on

him. No telling what he could do to our children.

claim him from the hospital. No one came forth. Children’s homes

him full-time. Seeing how involved I had become with Gidi, Mwangi

home that had finally accepted him on this condition.

On the day I dropped him at the home, he was over himself in tears,

frightened by the new surroundings and faces. I reassured him that

Otieno, the young man who had accepted the charge, would take care

of him until he got better. It was difficult to leave him so torn, for

although Gidi was once just a feature outside my gate, the happenings

imagined possible with an urchin. I promised to see him as often as I

As years passed, I watched Gidi grow into a handsome young man.

and anger that had been so deeply buried within. Before Gidi

happened in my life, I had been too comfortable in my world to care

about the less fortunate. I now find myself knocking on wooden doors

involved in. Once a month I help to dole out foodstuff and clothing.

he was 10, giving him back his confidence among peers. It was

the trophy for best student, and another for best athlete.

Once in a while I invited him to spend a day with us. His warm heart

and I. He became a positive influence on our two children contrary to

our earlier fear. When he was around, laughter filled our home. Kui

and Maina looked forward to his next visit whenever he left.

Today, Mwangi and I sit in church where Gidi’s parents should have

been. As he says his vows, he lookes in our direction and I flash him a

before us looked dashing in his new black suit. He did a mock

catwalk to which we cheered and whistled in approval.

said, “Thanks for giving me a second chance, Mum.” He had become

like a third child to Mwangi and I, and a brother to Kui and Maina.

Through the experience, we had learned invaluable lessons.

The ceremony is over by early evening. As he walks away with his

beautiful bride, Gidi turns to me and mouths the words, “Thank you.”