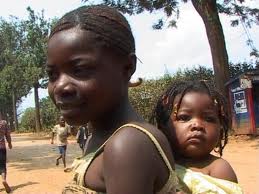 On the way, my mother exclaimed, “Son take heart, we are about

to reach town”. I never said anything but reluctantly pulled the

home made handcart behind them. A mountain of belongings was

down. The cargo included chickens, a pair of goats and a numerous

bags with meagre food and clothing. I once more unbuttoned my

body. My respiratory system was gasping for more oxygen and

after allowing a gulp of air sink in my lungs; I pulled the cart

harder to reach a group of frustrated women with their crying

babies. Indeed we were very tired and hungry after walking all the

It was a long trek, about 45 miles from our village. Back at home we

did not have anything to eat. All our cattle had died except the two

goats we had to salvage. We seriously needed food. I remember my

if we did not get some food for her. She looked about in confusion

and when her eyes were opened and for the life of her, all she could

do was to stare. I recalled again the obscurement that was ahead of us.

Dad and my two little brothers, who were initially to accompany us,

laid hope on us that they were to reach us tomorrow.

my mother gawked. She seemed to take him in just as completely,

she did so in a head to toe scan, her stare moved faster than the

leisurely perusal of a human being. “We must talk to him. He might

save us this agony”.

The landscape was desolate, dusty and incredibly dry. Local people

half year drought wrecked us. The only words I recall from my

mother’s faded tone was, “We cannot cope any longer but we

The following day, my father accompanied by neighbours and my

elder brother reached us. I could not avoid sparing a glance at a tired

old mzee, otherwise my father was always concerned about his

family. The small town we had made of a few stone houses

surrounded by mud huts. During the two days, the population of

marginalized reached to about 2000 people. Two big tents made up a

local hospital whereby in front of the first one, more than a hundred

women and children including my mother lined up waiting for

assistance. I remember a journalist asking the doctor how many

people had made it to hospital to be treated that day. “There is no

point of counting”, he said “we are just trying to do what we can for

them. At first I tried to count because that’s what I was trained to do,

but there are people everywhere, on beds, on the floor in between the

beds, on verandas outside, on chairs all complaining”. The second

tent was more scaring. It had very weak and emaciated children”.

I closed my eyes and said a prayer to God. Darkness fell before we

got assistance. We were all chilled to the bone by the time we got our

meagre food. Clutching my torn and tattered clothes to my cold body,

I was dragged for a while in vain witnessing a poor soul, which was

crying for help. “This crisis of individual and household nature had

rendered us as refugees who were volatile and unpredictable

migrating with their minimal personal properties”. On our way to this

in integration with the other community whose language tone almost

Life in the camp was strange. We got little share from what our

with long dry poles. Emaciated children never had peace, nobody was

satisfied but hope and good will kept us alive.

This was a real epicentre of the new famine tragedy. This land was

dusty and incredibly dry. The medical people supplied some biscuits

and bread, but what was hateful to hear was an explanation by one of

them. “We cannot give them more, there is not much food left in our

stores. It has been six days now since the last lorry came with supplies

and only God himself knows when the next one will come”. The ration

declined randomly and for another time we were starving. Relief food

was not enough. I give credit to a white man who always put goggles

for his dedication in supplying clean water to the people. The streams

were dry and black rocks and cracked riverbeds lay as exhibits.

The animals dehydrated to death.

drought. I was more touched when a bull my uncle had given me

died. This was in regard to the custom that when a boy was initiated,

he received a bull from his uncle. I saw how cattle carcasses sprawled

on the dry grazing yards now infested by vultures. I cried desperately.

migration. One is that 3 boys out of 4 who feasted on a carcass died.

mysterious way. The boy had eaten some meat when he fell down and

started craving for water. There was no water. His stomach ached

furiously and by how he behaved, it was evident that he was almost

dying. I was deeply amazed, which made me to empty my bladder in the

urine. “Jesus! What are you doing?” by the time I finished saying it, the

two gulps were in his stomach. I believe up to date that my urine saved

his life. I can’t really tell but I am sure that a miracle just happened.

That day, women screamed and men ignited a ball of fire to mourn

the death of the 3 boys. An elder chief stood in a dead silence and

said: “We cannot cope with the situation any longer, we have to leave

this place, we have buried enough”. Cry, grief and contemplation

The second incident involved weary and tired teenage girls. The

sexual abuse was prevalent. This was done to lure them in return for

food and clothing. Convincingly, this situation provided a breeding

If humanitarian concern over the plight of the children and refugees

was not extended to encompass education on pertinent issues such as

mass mobilisation for self-sufficiency in provision of basic needs, we

could all have died. Care for the disadvantaged should be there to

bring harmony. Now God is great because our land is full of millet

and sorghum. Last season, the harvest was bumper, we will stock our

stores and the rest will help the disadvantaged.