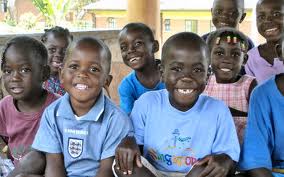 a puzzle. His mind was recalling a dream he had had a few hours earlier

head that was holding a piece of gold. The creature had suddenly turned

around and started to chase him. It then stopped and handed him the piece

of gold peacefully. What was this creature? Why was it so indecisive

and how… His thoughts were interrupted by a feeble knock at the door.

As he put his cup of black tea on the table to go and open the door, it was

pushed opened and there she was standing at the entrance staring at him.

She wore a red skirt that reached her knees. The upper most two buttons

of her white blouse were unbuttoned exposing her golden chain. A red and

black kerchief tug around her long black hair. Her face was reddened by

what seamed to him an emotional mixture of hatred, anger, love and a felling

Without uttering a word, she rushed to where he was and embraced him

tightly as if she would never let go. He could feel the pain inside her. He

knew that her heart had been broken and was bleeding. He wished he could

kiss it all away and reassure her of his love. She finally let go but quickly

held his hand as though if she didn’t he’d run away from her. As she

sat on the bed, her eyes travelled around the room.

big enough for his few belongings. On the left side was the bed with a

long thin sponge for a mattress and a single blanket. He slept on it during

the night and it served as a chair during the day. On the opposite side was

on old wooden table on which lay two cups one with his black tea, a plate,

three spoons, a knife and a pan, which were all the utensils, he owned.

Next to the table were a small stove and a tin lump.

“I’m going to Mombassa for three years”, she finally said. Her voice was

He felt like a red-hot iron had been placed on his skin. He wanted to ask

questions but couldn’t find the words so he just looked at her questioningly.

“My father hired a detective and he knows everything about us”, she continued.

“He said that no daughter of his will have a relationship with a…”,

she paused and looked down.

He felt like he had been stabbed. He hated being blamed for no faults of

his own but he couldn’t let her see his pain. He hugged her and assured

her that their love would pass the test of time.

“I must go”. She said still looking devastated but feeling a little better.

“I’m sure that the detective’s eyes and ears are on me. I fear what dad might

do to you but remember no matter how far apart we shall be, you will always

At the door he kissed her goodbye and she left, his eyes followed her. He

see her. He watched her until she disappeared, out of sight but certainly

not out of mind. He could still remember vividly how they had met eighteen

months ago as if it had just been yesterday.

weather in central Kenya. The short rains had subsided but their effects

could still be felt. The grass had grown tall and the flower garden

was weedy. The festive season was fast approaching and many people were

becoming more and more mindful of the welfare of the less fortunate.

Some brought clothes, others foodstuffs, few gave balls and other playing

equipments, many donated money but for those who didn’t have much

like Patrick, their energy was all they could give and they gave it whole

flower garden. It could never be said of him that he was not a hard worker.

that he didn’t realize her coming.

“Hello Clare”, he replied turning around to see a pretty girl in her early

loneliness “My name is Patrick”.

“Are you the one who weeded the flower garden?”, she enquired. “I was

“Yes”, he replied flatly. She was clearly impressed.

“Is this your first time here?”

“No. He found himself explaining to her that this home had fathered and

mothered him for the first sixteen years of his life. His mother had given

birth to him and died, a river having run it’s course. He was among the

pioneer children of this home at a time when they only offered food, clothes

and shelter but not education.

to know each other. Her parents would be away and she could give the

house help an afternoon off. She told her the exact place she’d have liked

On Friday time seamed to move painfully slow. He thought about her and

not turn up. He was even worried that she might turn up but the joy of

if they learned of his poverty.

and she took him home. At the gate was a flower garden with red

purple, orange and white flowers and a variety of other flowers he

didn’t know. He was sure that in his twenty-seven years of life, he had

never seen such a beautiful sight.

floor. There were four different sets of sofa sets with a golden yellow

polished, mahogany oak made table at the centre of the room. Most of

the electronic goods in this room were foreign to his eyes. On the frames

were valuable stone and woodcarvings that demonstrated the economic

stability and financial ability of this home’s occupants.

friendship. He talked of his poverty and she was to find him a job

as a driver and gardener in a nearby school. From that day theirs grew

love but which was kept a secret, only known to them and so it was that

Patrick closed the door of his room and left for Hekima School absent mindedly.

dream. He began to water the flowers which was his first task. It did not take

a genius to figure out that his work that day left a lot to be desired. The

students who were complaining of abdominal pains to the hospital.

Being the second largest hospital in the district, Kikuyu hospital has various

units; the eye unit, the general unit and a funeral home. In a small

room with a single window that looked like a kiosk, Patrick paid three

came to realize later was Mrs. Anderson, were making a desperate

plea, not to the patients but to those who had accompanied them. Their

plea however seemed to be landing on deaf ears.

“We have a patient who is in urgent need of blood type B-. If he doesn’t

have a transfusion sooner than later, he’s going to die. If you have

this blood type and you can find it in your heart to, please donate”. The

“Please help my husband. Think of him as your brother, your son, your

father or your husband, I’m sure you’d lend a helping hand. Remember

that the hand that gives is the same hand that receives”, Mrs Anderson

Patrick had donated blood before and knew he had blood type B-. He saw

this as an opportunity to give back to the community. And volunteered to

hand and told him countless thank you. She felt an overweening love for

the young man and wished she could power it out on him. What Patrick

didn’t know was that that woman was Clare’s mother. He was assured that

blood laboratory with the nurse and Mrs. Anderson went to give her husband

Mr. Anderson lay on the bed looking weak but his mind still active. He

thought of his enormous wealth, his big house, his thousands acres of

land, his fat bank account, his new expensive car and thought it ironic

that his wealth couldn’t help him now. He thought of the many things

He thought of love. He had sent his one and only daughter to Mombasa

out of existence. Now with death staring at him and knocking on his door,

but knew it was too late as the water would spill anytime. He wondered

what kind of a person he was. On one hand he went to church and

friend. He thought of a Cameroon that changes it’s colour in different

environments to suit itself. He was just like it.

always called him honey and had stood by his side through thick and thin.

His joy was her joy and his tears were hers, always offering him a shoulder

to lean on. The doctor entered and asked her to leave and come the

following morning just, as he had asked Patrick after donating.

and went straight to Mr. Anderson’s room. He looked much stronger and

“Honey, this is the nice man who donated blood”. Mrs Anderson introduced

Patrick to her husband.

In a second Mr. Anderson scanned Patrick from head to toe and saw not

by his generosity even to strangers. He stretched his hand and held

“You truly have a heart of gold”. He had begun speaking from the inner

most part of his heart. “You helped me in my greatest time of need. To a

man who is dying of thirst, a glass of water is worth much more than gold.

Outside, Clare had just arrived by plane and the nurse had allowed her to

parents and the man who had helped her father win the battle for his life.

loudly as she closed the door behind her, went to her Dad’s bedside, knelt

mother. It dawned on them on what their relationships were. Their faces

told of their surprise and disbelief.

The moon shone brightly. A still wind blew softly as if singing a sweet

song of joy and victory to Clare. Standing close to the gate, she could now

but her eyes had remained blind to even in broad daylight. She smiled at

the flowers, not the smile of loneliness she once had, no loneliness was

now a part of her history just like poverty was a part of Patrick’s history.

had come to be with her this night. Tomorrow she is getting married.